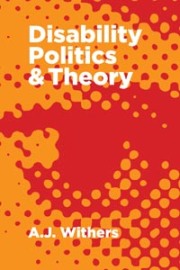 Disability Politics and Theory Cover: Orange and red dots positioned together to form the close up of a human eye.

I will add to this more soon, but basically it is a combination of years of research on, organizing around and thinking about disability.

Soon, there will be a plain language guide to make it even more accessible, although it is written in a pretty accessible way. And, because there are copy editors at Fernwood, even my spelling is good.

Here’s the official blurb:
An accessible introduction to disability studies, Disability Politics and Theory provides a concise survey of disability history, exploring the concept of disability as it has been conceived from the late 19th century to the present. Further, A.J. Withers examines when, how and why new categories of disability are created and describes how capitalism benefits from and enforces disabled people’s oppression. Critiquing the model that currently dominates the discipline, the social model of disability, this book offers an alternative: the radical disability model. This model builds on the social model but draws from more recent schools of radical thought, particularly feminism and critical race theory, to emphasize the role of intersecting oppressions in the marginalization of disabled people and the importance of addressing disability both independently and in conjunction with other oppressions. Intertwining theoretical and historical analysis with personal experience this book is a poignant portrayal of disabled people in Canada and the U.S. — and a radical call for social and economic justice.
Contents

Building Models and Constructing Disability • Constructing Difference, Controlling Deviance: The Eugenic Model • Diagnosing People as Problems: The Medical Model • For Us, Not With Us: The Charity Model • Revolutionizing the Way We See Ourselves: The Rights and Social Models • Looking Back But Moving Forward: The Radical Disability Model • References • Index
About the Author

A.J. WITHERS has been involved in radical organizing, specifically within the radical disability, anti- globalization and anti-poverty movements for 15 years, and has been employed as an organizer with the Ontario Coalition Against Poverty (OCAP).

You have watched their inspirational stories on TV. Supercrips are people who are considered to have overcome their disabilities because they do something extraordinary (like wheel across Canada) or ordinary (like paint pictures or have a baby). The supercrip is also called the “abled-disabled”.

Tanya Titchkosky has defined it as:

those people who can exclude attending to disability by attending fully to their ability to participate in society, as normally as is possible, and they ultimately and inevitably signify having a “positive effect on others,” “contributing fully to the community,” and “maximizing their potential”…The stories of the abled-disabled demonstrate that even disabled people are able to fit in and take up an appearance which shows that their conduct is undoubtedly oriented to an unquestioned normalcy. Through this way of conceptualizing disability, disability becomes the space in which the value of normal shines forth without ever having to be directly spoken of, and disabled people are held to be asserting their individual ability (value) when they can be seen as oriented to serving this normal order.

The way that disabled people are constructed through this approach (largely by the charity model positions disabled people as either the objects of pity or inspirational overachievers. Those are the only identities that we can occupy.

The Charity approach to disability viewed as being in the ‘best interests’ of disabled people but it does not consider disabled people’s experiences and knowledge as necessarily valuable or essential. This approach is about well meaning ‘do-gooders’ acting on our behalf without us. Because we aren’t in control of the process little good, or even harm, is often the result.

In the past decades, people who follow the charity model have not so much tried to define disability as they have tried to redefine it. These attempts to redefine or rebrand disability have largely failed because they have been made by people, while well meaning, who are largely not disabled and who have a negative and paternalistic view of disability.

One example of the rebranding of disability through the charity model is the term handicapped. The word handicapped replaced gimp, crip/crippled, and lame. Handicap is an offensive and unacceptable term as it is derived from a gaming term which means to equal out a disadvantage by, for instance, spotting points or playing with one hand tied behind your back. The word handicap implies an inherent disadvantage that undermines the quality of disabled people’s lives. Handicapped later became differently-abled, which establishes, by definition, what normal is and that we aren’t it.

Similarly, retard was transformed into slow and then to developmentally delayed or developmentally disabled. Again, these terms establish a norm, which is problematic. These terms also embed the concept in them that there is one line of development for people. They imply that people with intellectual disabilities have somehow stalled in their “development” and are fixed at a spot in time where their lives will be forever unfulfilled. They don’t have room for the plethora of meaningful experiences that people with intellectual disabilities undergo.

Challenged is another term adopted by others on our behalf as a way of describing our lives. Where the medical model inserts diagnostic labels that are individualizing and define people’s entire identities, politically correct liberals individualize our oppression by calling us challenged. This label tells us that all obstacles we face are because of our own minds and bodies, not because of social inequities and inaccessibility.

Furthermore, challenged, like developmentally disabled, differently-abled, and handicapped does nothing to change our lives, it doesn’t build ramps, or housing; it doesn’t provide interpreters or personal support workers; it doesn’t bring equality or autonomy; and, it doesn’t abolish segregation or discrimination. The attempts by well meaning liberals to establish “politically correct” terms to define disability are just that, attempts to dictate how things change for our benefit. In this case, nothing changes but the label.

The entire charity approach is designed to ensure that no real change ever occurs. It is about people doing good for others, it is not about change, it is not about liberation, it is about the agents of charity – the do-gooders feeling better about themselves and the world they live in.

It brilliantly co-opts the language of resistance talking about “fighting,” “resisting,”
and “beating” disabilities.

[Image of a green Shamrock that says From Your Heart: A Shamrock to Fight Muscular Dystrophy – MDA]

Charities, however, identify our disabilities as the things that oppress us, not social barriers, not systemic issues – our bodies, our minds (the things that give us life and make us who we are).

[Image of an arthritis society web banner with blue text in all capitals that says: “Arthritis: Fight It!” a blue bird (possibly a dove) is between the words arthritis and fight it]

The things to be resisted are those are our disabilities and no fundamental social change should ever occur under this view. This is in itself an oppressive view and why the social model and the radical model have worked to reclaim and redefine disabled people’s points of resistance and fight for social justice rather than the elimination of disability.