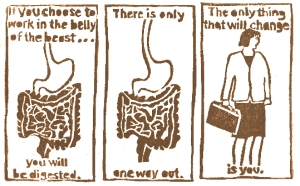 “If you choose to work in the belly of the beast… you will be digested. There is only one way out.The only thing that will change is you.” Brown ink on white. 3 panels: 2 of the intestinal system, the last of a woman in a business suit. 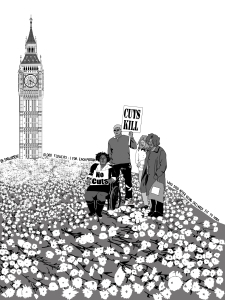 “UK Parliament: 10,000 flowers – 1 for each person who died after being declared fit to work.” Black and white drawing about the austerity programs in the UK cutting disability benefits. 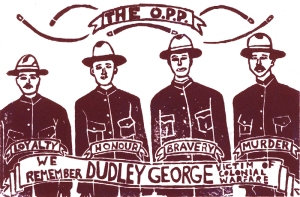 “We remember Dudley George: Victim of colonial warfare.” Dudley George was killed by the Ontario Provincial Police (OPP) in 1995 while protesting on his stolen territory. Dark red ink on white paper. 4 OPP officers (based on an OPP postcard) each with a banner over them saying “Loyalty,” “Honour,” “Bravery,” “Murder.” There is a banner at the top that says “The OPP” – bullets with trail lines adorn the banner.

Pencil drawing of a group of about 25 protesters in a line holding a banner that says “Access Denied.” The protesters are a divers group, some standing and some sitting in wheelchairs. In the background several protestors are holding banners that say “End Austerity – Stop the” (the word cuts is obscured) and “Justice.” Several protesters are also holding placards.

Normal is boring – reimagine sexy.
This image is a rubber stamp image with a black foreground and pink background. It depicts a blonde haired white woman wearing a revealing striped dress and fishnet stockings who is sitting in a wheelchair. The background is black but there are several curved dotted lines with hearts on the end emerging from behind the woman.

Normal is boring – Reimagine sexy. rubber stamp image with a black foreground and blue background. It depicts a stoic looking Black person with a beard and short black hair. They are wearing a white shirt, collar raised and a black tie with a star on it. Their tie curves around the shape of the person’s breasts. The background has several paisley shapes made out of dots with hearts in the center.

Normal is boring – reimagine sexy. Rubber stamp image with a black foreground and orange background. It shows a smiling fat woman with light skin and long dark hear who is wearing a slinky piece of lingerie with garter belts. she is sitting with one leg slightly propped up and the other hanging down. The background has two large hearts which are partially covered by the woman. the hearts have decorative swirls emerging out of them.

Normal is boring – reimagine sexy. Rubber stamp image with a black foreground and red background. It depicts an Asian man wearing a hat and softly smiling while looking straight ahead. He is wearing a white fedora hat, a white t-shirt with a star on it and black pants. He is sitting and his right arm is behind him, propping him up. His left arm is amputated just below the elbow.

Image of a circular wheelchair symbol with the person holding a placard that says “Allies not excuses.” Red ink on white paper. 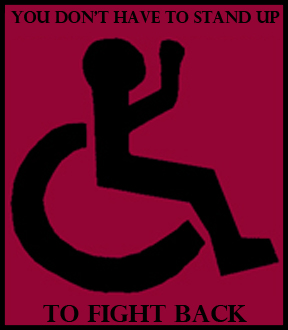 You Don’t Have to Stand Up to Fight Back! Standard wheelchair symbol with raised fist. Black on Pink. 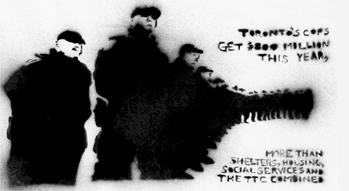 Stencil of a line of police. The text says “Toronto’s cops get $800 million this year, more than shelters, housing, social services and the TTC combined.” This is a few years old. their budget is now about $1 billion.

“We are here to stay.” Red ink stenciled on fabric. There were part of an anti-gentrification demonstration organized by the Ontario Coalition Against Poverty in the Downtown East End in Toronto. 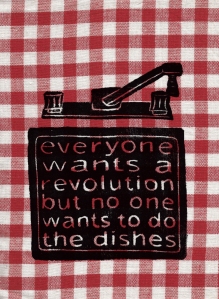 “Everyone wants a revolution but no one wants to do the dishes” Black stamp on red gingham tea towel. My friends mom said it when people were making a big mess, talking politics and expecting her to clean it up.

Large brick building with bars on the windows being bombarded by birds carrying wrecking-balls in their talons. Tan to dark brown ink gradient on white paper. 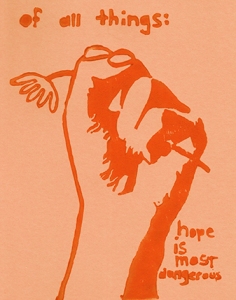 Of all things: hope is most dangerous. Image of fist holding a wilted flower. Print of fist Ink on paper, dark orange on light orange.

Stencil of a crowd of protestors. Several people holding placcards, some standing, some using wheelchairs. Maroon paint on white paper.

“Transitioning is Beautiful.” Butterfly resting on flowers. Sky and treed horizon in the background. Orange ink on white paper. 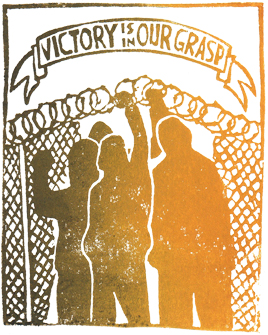 Silhouettes of four people standing in front of a cut open fence while holding the still remaining barbed wire above them so they can pass through it. Banner above them says: “Victory is in Our Grasp.” Rubber stamp with a gradient of brown to orange ink on white paper. 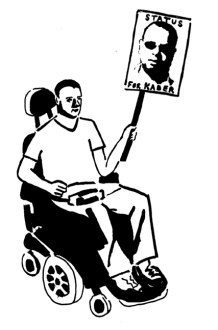 Man sitting in an electric wheelchair holding a placard with a picture of Kader that says “Status for Kader.” 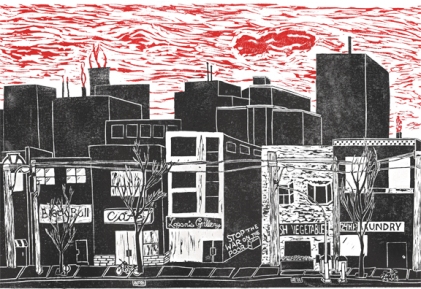 Black city scape with a number of buildings in the forefront. A sidewalk with the occasional tree, streetlight post and locked bicycle. An alley opens to the street near the center of the block. Graffiti is on the wall of the building in the alley that says “Stop the war on the poor.” The wispy sky above the city is red. Rubber stamp on paper.

The Sanctuary Movement.
Image foreground is a barbed wire fence. The top of the poster has images of protestors holding placards and a woman holding a megaphone. The center of the poster shows a cityscape with a church. One person is running towards it and away from a police officer who is wielding a baton. There are also two people carrying someone in a blanket (suspended on a pole) towards sanctuary. The background is a stylized map of Central America.
Text: In the 1980s, U.S. imperialism helped lead to brutal conflicts in Central America. Millions of people were disappeared or killed and an unknown number fled. The government wouldn’t grant refugee status to the migrants because it refused to acknowledge the existence of the atrocities. In response, over 70,000 people opened their homes, meeting places, churches, synagogues and Quaker meeting houses to hide and support the war victims. Between 200,000 and 300,000 people were able to evade deportation to near certain death because of this movement. Today, there are many people in Canada and the U.S. who rely on sanctuary to escape the devastation of imperialism. These countries refuse to accept people based on their own oppressive military and economic agendas. Make every home, every street, every city a sanctuary.